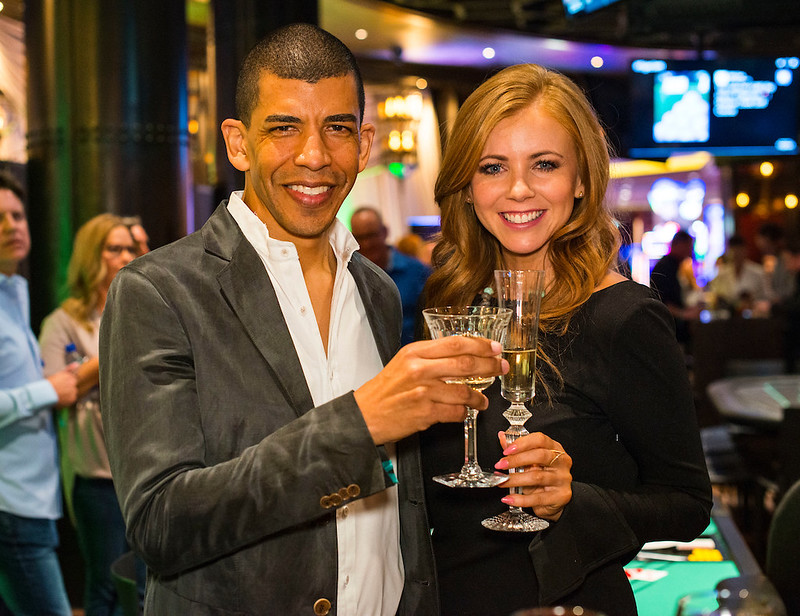 What’s to expect?
A dinner and presentation highlighting the latest in age-reversal breakthroughs at Mizumi, an auction with prestigious art offerings from artists such as Daniel Arsham, Sorayama, and Richard Orlinksi. As well as an invitation poker shootout tournament and an afterparty at the hottest party venue in the city, Delilah at the Wynn. Join DJs Zedd, Zhu, and other surprise guests as we party the night away. More information.

Experience a private dinner with New York Times bestselling author and one of the “World’s 50 Greatest Leaders” as named by Forbes. Mr. Diamandis. Founder and executive chairman of the XPRIZE Foundation, which leads the world in designing and operating large-scale incentive competitions, Peter Diamandis is also the executive founder of Singularity University, a graduate-level Silicon Valley institution that counsels the world’s leaders on exponentially growing technologies.

Discover Dr. David Sinclair’s Lab at Harvard Medical School in Boston with a tour given by Time magazine’s “100 most influential people in the world.” Dr. Sinclair, Professor in the Department of Genetics and co-Director of the Paul F. Glenn Center for Biology of Aging Research at Harvard Medical School.
Having obtained his Ph.D. in Molecular Genetics at the University of New South Wales, Sydney in 1995, and worked as a postdoctoral researcher at M.I.T., he is best known for his work on understanding why we age and how to slow its effects. He is also co-founder and co-chief editor of the journal Aging. With work featured in five books, two documentaries and on 60 Minutes, Morgan Freeman’s Through the Wormhole and other media. Dr. Sinclair holds the distinction of making it to Time magazine’s “100 most influential people in the world.”

Head to Miami for an exclusive tour of Longeveron, the leading facility in cell-based therapies, followed by a private dinner for four at either the Bourbon Street Steakhouse or Fontainebleau. Dr. Hare is Chief Sciences Officer, Senior Associate Dean for Experimental and Cellular Therapeutics, Director of the Interdisciplinary Stem Cell Institute (ISCI), and Louis Lemberg Professor of Medicine at the University of Miami Miller School of Medicine. During his research career, he has pioneered the use of allogenic adult cell therapy for multiple disease areas. Under his leadership, ISCI developed cell-based therapy programs in cancer biology, cardiology, aging, neonatology, skin diseases, bone diseases, neurologic diseases, ophthalmology, and a program devoted to the ethics of stem cell therapy.

Travel by limo and luxuriate during an intimate dinner for four people, prepared by a private Japanese Chef at Steve Aoki’s house and continue your VIP-access evening at Omnia for Steve’s DJ Booth Experience, where you and your guests will hang out in his personal book during his exhilarating live performance.

Learn technical skills and performance secrets at a private one-hour DJ lesson from Steve Aoki at either Omnia Nightclub or Beach Club, and you’ll be ready to spin tunes at your own private parties!

Enjoy exclusive access for three to Shaquille O’Neal’s hospitality table at Encore Beach Club or XS nightclubs at the Wynn Las Vegas. While on-site, you and your guests will have access to the DJ booth, take selfies with Shaq on stage, and personally smash the CO2 cannon button during the show!

Play an entertaining and competitive round of golf with poker GOAT Phil Ivey at an exclusive Golf Club Las Vegas, one of the top-rated golf courses in the world. Chat about bad beats or bet who gets closest to the pin during this unforgettable experience.

Make your poker buddies jealous when you and a friend enjoy behind-the-scenes access to a legend at Godfather of Poker Doyle Brunson’s house during a recording for his highly anticipated documentary.

You will play in the $10,400 WPT Main Event for a chance to win a chunk of the $15 Million Guaranteed prize pool, the largest guaranteed prize pool in live poker history, this December 12-20 at Wynn Las Vegas. You will also get an exclusive behind-the-scenes tour of the iconic final table set and will have a memorable dinner with WPT Cast members.

Brian Donnelly, known professionally as Kaws, is an American artist and designer. Kaws’ sculptures range in size from a few inches to ten meters tall and are made from various materials including fiberglass, aluminum, wood, bronze, and a steel pontoon inflatable raft.  Kaws’ influences come from traditional high art painters like Gerhard Richter, Claes Oldenburg, and Chuck Close, and he has been compared to the likes of Andy Warhol for his cross-market appeal and ability to blur lines between commercial and fine art. His work is exhibited in galleries and museums, held in the permanent collections of public institutions, and avidly collected by individuals including music producer Swizz Beatz, internet figure PewDiePie, rappers Pharrell Williams and Kid Cudi, and members of South Korean group BTS.

Daniel Arsham is one of the most influential artists of our time with his brand of deconstructed futurism. Arsham succeeds in breathing new life into everyday objects, experimenting with structure and examining his matter from a historical perspective. He confuses and confounds the expectations of recipients in terms of shapes and design, providing insights into a world where the past, present, and future can co-exist.

As a child, Daniel Arsham spent his time drawing sneakers, cameras, and various Porsche models, in particular the legendary 911 Turbo. It became a passion that has accompanied him ever since – and provided the American artist with a source of inspiration for many of his pieces.

Founded by Dominic “The Shoe Surgeon” Ciambrone, Surgeon Studios is a Los Angeles-based collective of creatives built to inspire creativity, further the industry, and push the unique and timeless craft of custom shoe making and design. The winner of this auction item will work directly with Dominic to design your own bespoke handmade pair of one-of-a-kind shoes, making you the envy of all your friends. Check out The Surgeon on Instagram.

Impress your home game regulars with your very own BBO Poker Table. BBO poker tables are some of the most exclusive tables in the market. They will not only help you design your own table and felt, but have the table shipped directly to your home or office and have it professionally installed. Get familiar with BBO poker tables.

Smarter than man, Wild Kong by Richard Orlinski throws an oil drum. The gigantic gorilla from Skull Island is a Hollywood legend that reigned over a hostile natural environment packed with prehistoric animals. It can protect species and live among them.  Wild King Oil understands the dangers of pollution and uses its strength to end its plague on the planet.

Richard Orlinski has been the biggest selling contemporary French artist in the world since 2015. He began his artistic career in 2004 and created his first work, a bright red resin crocodile, which soon became an iconic piece in the sculptor’s bestiary.

The artist took inspiration from pop culture, everyday objects, popular things. Richard Orlinski soon developed new sculptures, often of animals, all symbols of freedom, power and passion. The result: electrifying works of art, in pop colours and a faceted style, that would be seen all around the world. Exhibiting his works, often of spectacular dimensions, in unusual places and the great outdoors soon became his signature.

He was made an Officer for the Ordre des Arts et des Lettres by the French Minister of Culture Roselyne Bachelot-Narquin in 2021.

The Aoki Foundation has a primary goal of supporting organizations in the brain science and research areas with a specific focus on regenerative medicine and brain preservation. Their vision is to one day see a world where degenerative brain diseases do not exist and science and technology play a direct role in extending the healthy lives of ourselves and our loved ones.